Russia is one of the countries where surrogate motherhood is fully legalized. Every woman who decides to become a surrogate mother, as well as the genetic parents, must know their rights and obligations under the current legislation.

Observance of the rights of surrogate mothers

Surrogate motherhood is one of the assisted reproductive technologies in which a woman called a surrogate mother carries a baby that is not genetically related to her. In 2001, the World Health Organization adopted the following official wording of surrogacy programs: “A woman whose pregnancy came after the introduction in the uterine cavity of an embryo obtained as a result of fertilization of third-party oocytes by third-party sperm is called a gestational carrier. The legal parents of the child are the people whose sex cells were used in the fertilization process.”
Legal issues of surrogacy in our country are regulated by law, and there is a clear system of rights and obligations of the genetic parents and the woman who made a firm decision to become a surrogate mother. Civil law agreements drawn up in accordance with the norms of the current legislation ensure the observance of the interests of the surrogate mother and determine her rights and her obligations/liability. These contracts legally establish the liability of each of the parties, determine the status of the genetic parents and the surrogate mother. If the surrogate mother becomes pregnant, it is not possible to terminate such a contract unilaterally. Therefore, before taking part in the program, you need to be 100 percent confident in your decision: “I want to become a surrogate mother!”

To protect the interests of a surrogate mother, a tripartite agreement is concluded, or three separate agreements: with genetic parents, an agreement on the carrying of the pregnancy and transfer of the baby to them; with the medical clinic: on the provision of medical services, pregnancy care; with the agency of reproductive technologies, on the observance of rights and guarantees involved in the participation in a surrogate motherhood program.
The obligations of the genetic parents of the child in relation to the surrogate mother usually include: payment of monetary allowance during pregnancy, material remuneration for carrying the baby and for the delivery, payment for the necessary examinations and medicines, reimbursement of transport costs and provision of housing for the time of participation in the program, counseling sessions with psychologists and lawyers, extra costs that may occur during pregnancy.

Surrogacy is a program which is quite difficult from the legal, medical and psychological points of view, so it is very important for a woman who decided to become a surrogate mother to do this with the help of a professional agency, which will guarantee the observance of all her legal rights, registrations for payments under medical insurance policies and proper remuneration. For biological parents, a reproductive technologies agency provides a guarantee that their child will be carried by a healthy woman and that there will be no problems with the registration of their parental rights after birth.
We recommend that the couples who are thinking of taking part in surrogacy programs in the role of genetic parents and women who decide to become a surrogate mother read about the main laws regulating the issues of assisted reproductive technologies in our country.

Article 55. The use of assisted reproductive technologies.

Assisted reproductive technologies are the methods of infertility treatment in which some or all stages of embryo conception and early development take place outside the mother's body (including the use of donor's sex cells, as well as surrogacy).

It is not allowed to choose the sex of the baby when assisted reproductive technologies are used, except in cases when there is a risk that some sex-related diseases may be inherited.

Citizens have the right to cryopreservation and storage of their sex cells, tissues of reproductive organs and embryos at the expense of personal funds and other means provided by the legislation of the Russian Federation.

Sex cells, tissues of reproductive organs and human embryos may not be used for industrial purposes.
To become a sex cells donor, you need to be a citizen aged eighteen to thirty-five years, physically and mentally healthy, and you need to have undergone medical and genetic tests.

Citizens who are going to use donor sex cells and embryos have the right to be informed on the results of the medical and medical/genetic examination of the donor, their race and nationality, as well as appearance.

Surrogacy is about carrying and delivering a child under a contract concluded between a surrogate mother (a woman who carries the fetus to term after the transfer of the donor embryo) and the potential parents whose sex cells were used for fertilization, or a single woman, if it is impossible, for medical reasons, for her to carry or deliver a baby herself.

A surrogate mother may be a woman aged from twenty to thirty-five who has at least one healthy child, and she must have a medical certificate confirming her satisfactory health condition; she gives a written informed voluntary consent to medical intervention. A married woman may become a surrogate mother only subject to a written consent of her spouse. A surrogate mother cannot act as the egg donor at the same time. You can find the complete text of the Federal Law here:

You can find the complete text of the Federal Law here:

The Family Code of the Russian Federation of 29.12.95 N 223-FZ deals with the issues of touches upon the surrogate motherhood in two of its articles:

Fill out the form

During the 11 years of our work,
the center gave life 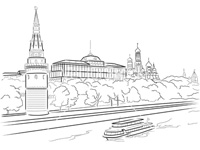 For more detailed information about our representative office in Moscow, visit the website: www.surmama-msk.com